Exploring Different Foods From Around the Globe

Whether you prefer pizza delivery services or consuming your favourite Italian dish in restaurants, there is always something new to savour. Given that the humble pizza is just about the most versatile food you can eat, there is seemingly no end to the inventiveness that chefs put on offer. Tired of a plain Margherita? Fed up with Hawaiian? Read on to discover what is trendy in the world of pizzas and their toppings right now.

In America, the Oriental influence on pizzas has been around for a couple of years and it is now starting to take off in Europe as well as Australia. Thai chicken is a popular pizza topping that adds a new twist to the idea of fusion cuisine, for example. Another popular pizza on the other side of the Atlantic has been a Korean influenced topping. This sort of pizza comes with that Korean favourite, kimchee, plus soy sauce and ribs. Of course, these sorts of toppings won't necessarily last the test of time but there is little doubt that they are very much on trend and of the moment!

Want to add a little pizazz to your pizza servings? If so, then another US trend that looks set to take Australia by storm is the Detroit-style of pizza which is served with four right angles at each corner. A typical Detroit pizza is laden with pepperoni and a healthy amount of green chilli, so it is not startlingly original in terms of the topping. However, to be truly on trend, you will need to serve you square pizza on a thin crust. By all accounts, thick crust Detroit-style pizzas are out-of-style right now.

Pizza as a Breakfast Dish

For some people, the pizza is a foodstuff worthy of being present at every meal. Indeed, a trend that began in professional pizza making in 2017 that shows no sign of stopping is the so-called breakfast pizza. Taking inspiration from the breakfast burrito, so loved in Mexican cuisine, this sort of pizza includes eggs and bacon, or ham, to get you going in the morning.

According to some in the food industry, black food is a trend that will be a big thing throughout 2018. So-called Goth food includes using activated charcoal and lightly burnt edges to create a dark look. It might not be everyone's idea of a good pizza, but that's the beauty of them. You can always choose something else! 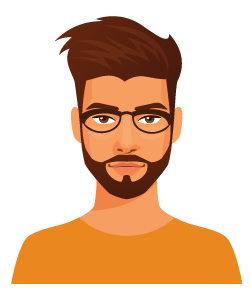 My name is Eric and I love food. However, for many years, my love of food was confined to dishes which are traditionally served in Australia. You know, Surf n Turf, and meat straight off a BBQ. I was quite happy in my own little food bubble, but I had no idea of the variety of fantastic food I was missing out on. All that changed when my friend decided to start a dinner club where we would all cook each other food from another country. When I tried Chinese chow mein for the first time it blew my mind. Since then, I have been eating food from all over the world and I love it.